Getting out of Cusco involved a tradeoff. Once I got out of the historic center of town, I no longer had to ride over cobblestones and loose bricks, but traffic etiquette regressed to typical Latin American levels. I guess they keep appearances in front of the tourists.

Once I got out of town, I found myself next to a river and a railroad. The highway paralleled both of them I was going upstream, but it was a calm river, and anything a railroad can do isn't steep. The road scaled a small hill every now and then, but nothing bad.

I was hoping to see Ulrike and Kay today, the Germans that treated me to dinner in Nasca. They would be driving from Puno to Cusco today, just as I was headed the opposite direction on the same highway. They said they'd try to keep an eye out in case we could meet up again. Every time I saw a black truck, my hope and anticipation got the better of me. By 2:00 PM, I got the idea that I missed them.

Late in the day, I saw something on the side of the road that looked something like a visitor's center. I pulled over to check it out, and it turned out to be a restaurant. A couple tourist vans had stopped there. I suppose I didn't need to stop at all, but used the bathroom as long as it was there.

Just as I was about to leave, a couple Mormon missionaries, one from Lima and the other from Guatemala, asked me to take their picture. We got to talking, in part about my ride and in part about their mission. As it turned out, they were based in Sicuani, the same town I was aiming for, only about 15 km up the road. I asked about a place to stay, and they said they could help me out somehow, but it would be easier to talk in a little while, in Sicuani. We agreed to meet at the Mormon church. I was excited. I might be finally staying in a church after Catholics kept sending me away! And Mormons, in my experience, are overwhelmingly kind and generous. Maybe this would lead to them contacting other missionaries on my way?

When I got to the Mormon church an hour later, no one was there, and typically, the gate was locked. I waited half an hour. Nothing.

I know I've complained about the dishonesty problem in Latin America many times before, and by now, it's not news. I should write about when people tell the truth, because that would be unusual. But this stuck out. You know the problem is bad, and widespread, when even Mormons won't tell the truth.

I had hoped the day to Ayaviri would be much like the one to Sicuani: mostly flat, slowly gaining elevation, perfect weather. As it turned out, the negligible incline was more significant, and there was a ferocious headwind. Eventually I found myself over 4,000 m again, which is the point at which the elevation has a significant effect on me. I only had to do 110 km today, but I was moving slow enough that even finishing before dark was in doubt. My legs ached like i was trying to win a sprint, even though I was barely moving. I kept stopping to catch my breath, something I normally never need to do. Fighting the wind, the hill, and the elevation all at the same time seemed impossible.

The incline surprisingly came to a stop and turned into a decline. Only about one km later, I found another touring cyclist, from Argentina. He was on an aluminum road bike with skinny tires. He had no front rack and even his load on the rear looked a lot smaller than mine. As it turns out, he doesn't carry a tent or a sleeping bag, and stays in hotels EVERY night.

I tried asking about his tour, but after I managed not to stumble in my first two sentences, he must have guessed that I'm fluent. This guy liked to talk - fast. I managed to understand some of what he said about Bolivia, that he thinks it's a dump, La Paz is dangerous, and the hotels don't have running water. I was thinking I'd soon trying camping more often anyway.

He pulled out a half-empty Coke and offered it to me. I thanked him, took a couple gulps, and handed it back. He finished it off and threw the empty bottle to the side of the highway, joining dozens of others. Dick.

I stopped for lunch in a small town. A sizeable bowl of minestrone soup, a potato, a pile of white rice, and a small amount of meat (I never found out what it was). Cost: $1.75. In other words, less than a can of beans costs here. Yeah, I need to do this more often.

The second half of the day had rolling inclines and declines, and thankfully, the road turned until the wind was from the side. It still wasn't easy, but much better.

I had no idea how large Ayaviri was, and the first few places to stay were both closed, so I took the first place I found. It turned out to be a dump, including a community bathroom that boiled down to a dirty sink and a hole in the floor. Shower? Even a cold one? Haha, that's funny. But it was cheap. Walking one more block, I found at least four places that were probably a lot better, and probably didn't cost much, if any more. But if I'm going to be asleep anyway, maybe it doesn't matter.

I bumped into a few interesting folks at a tienda, including a medical student that was doing some kind of medical mission, and Jung, another touring cyclist, from South Korea. Her English was perfect, but her Spanish was even worse than mine. Her bike, bought in South America, was basically a low-end mountain bike, but it would seem she was getting on fine!

Jung wasn't hungry, but still joined me for dinner at a nearby cafe. She'd been riding for a couple weeks, starting in Brazil, mostly with friends. This was her first day solo! Before that, she'd been taking buses, and planned to only ride as far as Cusco, then get on a bus again. Before that, she'd been traveling in Australia and Italy, and for all I know, other places too. This gal gets around! This was her first bike tour, but based on her spirits, and her experience traveling the world, seemed like she was more than alright.

I managed to leave at an early hour the next morning - perhaps too early. By the time I even got out of Ayaviri, my fingers were in pain. I hate the cold. I had on long-fingered biking gloves, acrylic glove liners, and latex kitchen gloves over those (the idea is they're wind- and water-proof). Still, even on a sunny morning of about 3 C, it was bad. After half an hour, I had to stop and tuck my hands in my armpits. On my body, I was only wearing a T-shirt and my "waterproof" jacket, and I was doing OK. It's incredible how easily my hands get cold.

After only another half hour, I took off my kitchen gloves, and in another half hour, took off almost everything. The sun heats things up fast at this latitude and elevation. For a moment, it appeared that I'm woefully unprepared for cold temperatures, of which I'll be getting more as I go, but as it turns out, I might be OK. It would help to get a later start and let the sun heat up the air. And as I move farther south, the sun will start coming up by 4:00 AM, if not 3:00 AM, so that shouldn't be too hard.

Aside from the cold start, I only had 100 km to do, and it turned out to be some of the easiest 100 km I've done in a long time. Merely not having mountains and headwind - in other words, no advantages, but no disadvantages either - can do a lot for you. And for the bulk of the day, sunny skies, comfortable temperature, near-perfect weather.

My WarmShowers host didn't give me directions until I got in town and called. He only told me the name of a park near his house, and luckily enough, someone standing nearby offered to ride there with me on his bike. Cue the narrow streets, blocked intersections, and frequent honking. But he got me right there, no problems. Thanks, man!

Geovanni found both of us before we found his house. He was in the park, doing some kind of construction work. He asked me to wait a few minutes, then led me to his house, a block away.

My happiness at discovering he had a washing machine is hard to describe. I had to put it through three rinse cycles, because each time, the water was coming out dark brownish-gray, almost black. It still did the last time, but less so.

One of my shirts, the one I wear the most, is done for. I'm keeping it for now, not to wear in public or on the bike, but simply because I imagine that it'll soon get cold enough that I'll want to wear as many layers as possible, holes or not. I'd like to replace it with something similar,  but I'm not sure where to find such a shirt.

My other problem has to do with my belt drive. It's missing six teeth now, including three in a row. I think the bigger problem may be the sprocket, where the divots have worn down and are now too wide. So instead of sitting snugly in the divots, the teeth find a way to press up against one side. 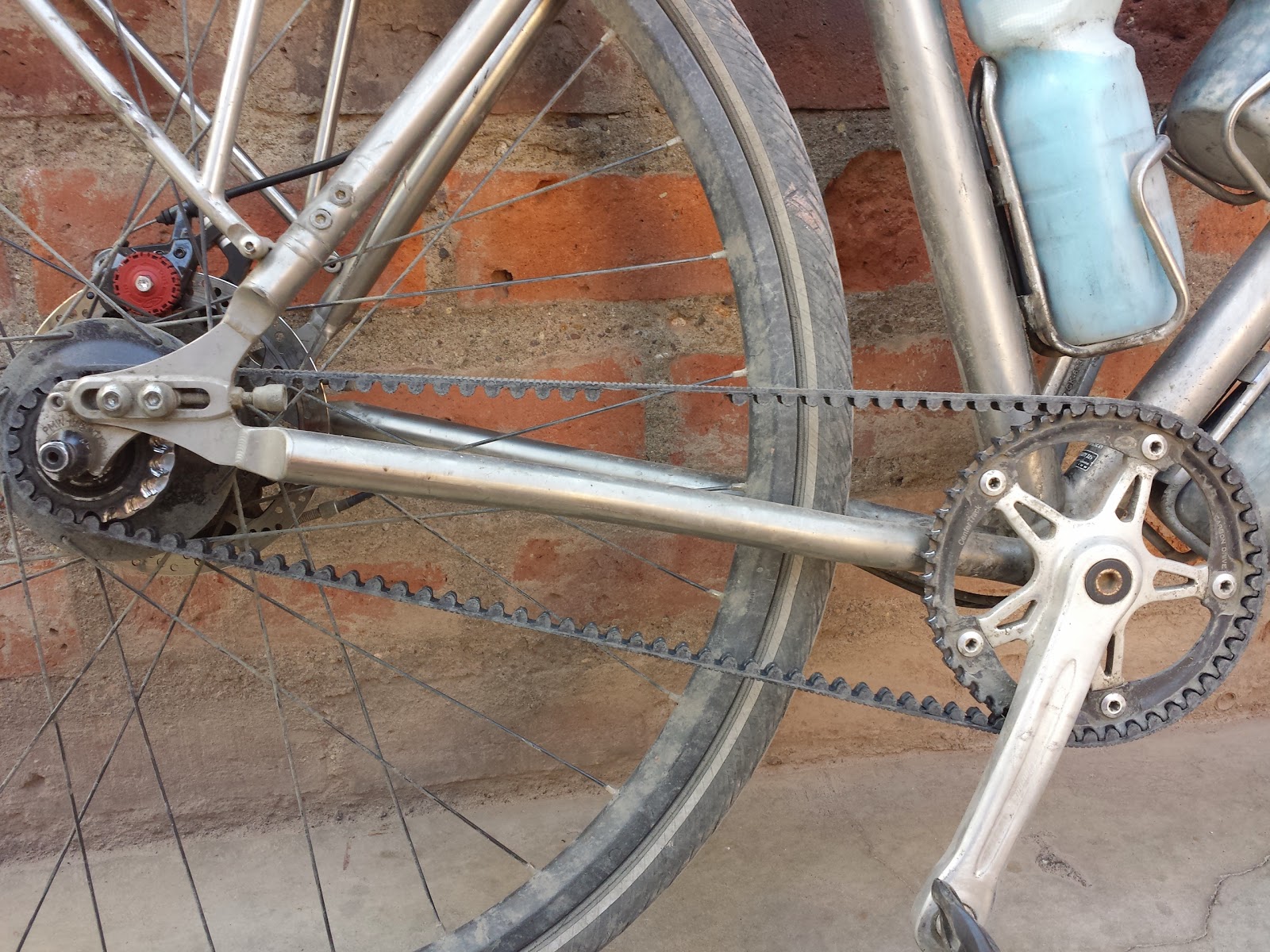 I haven't replaced the belt yet, because I think the sprocket problem may be causing the belt problem. So for now, the plan is to leave the old belt on for as long as possible, then finally use the new one for as short a time as possible. Because once both wear out, the ride is over. Same thing goes for something as simple as a snapped shifter cable. Hang in there, Valeria!

Geovanni proved to be an unusually warm, friendly host, though was gone working most of the day. I spent the afternoon doing laundry (in a real washing machine!). After dark, another cyclist showed up, Lee, from Edmonton/New York. He'd started his ride in Edmonton, and was headed to Ushuaia like me. Like many people, he was taking a year and a half. He had postponed his PhD program to do this ride, and was occasionally taking days off to write papers and submit them to his advisor.

Geovanni shared some bread and coffee with us before we went out for chicken. I woke up early and used the stove to make hot oatmeal for once, then left before Lee was awake. Geovanni caught me on my way out, and rode with me for the first km or two so I could find my way out of Juliaca.