If you’ve been thinking about hiking a Triple Crown Trail like the AT, PCT, or CDT, there are a lot of decisions made in the planning phase. Nobo, Sobo, or flip-flop? Thru-hike or section hike? How many zeros and near-os should I plan for? Does a bivy work for cowboy camping? Town resupply, mail drop, bounce box, or hiker box? How often can you expect to successfully yogi for trail magic? What base weight and skin-out weights should I shoot for?

If your first question is What the heck are you talking about???, read on.

Backpacking:  Hiking with a full-sized backpack, intending to spend at least one night Wild Camping. Not to be confused with seeing Europe by train or bus (for this activity, how about “Buspacking”?).

AT:  The Appalachian Trail, a ~3,500 km (~2,200 mile) trail extending from Georgia to Maine and passing through 14 states on the Atlantic Coast

PCT:  The Pacific Crest Trail, a 4,270 km (2,653 mile) trail extending from Mexico to Canada, passing through the three states on the Pacific Coast

JMT:  The John Muir Trail, a popular 340 km (211 mile) trail in the Sierra Nevada range, which shares most of its miles with the PCT 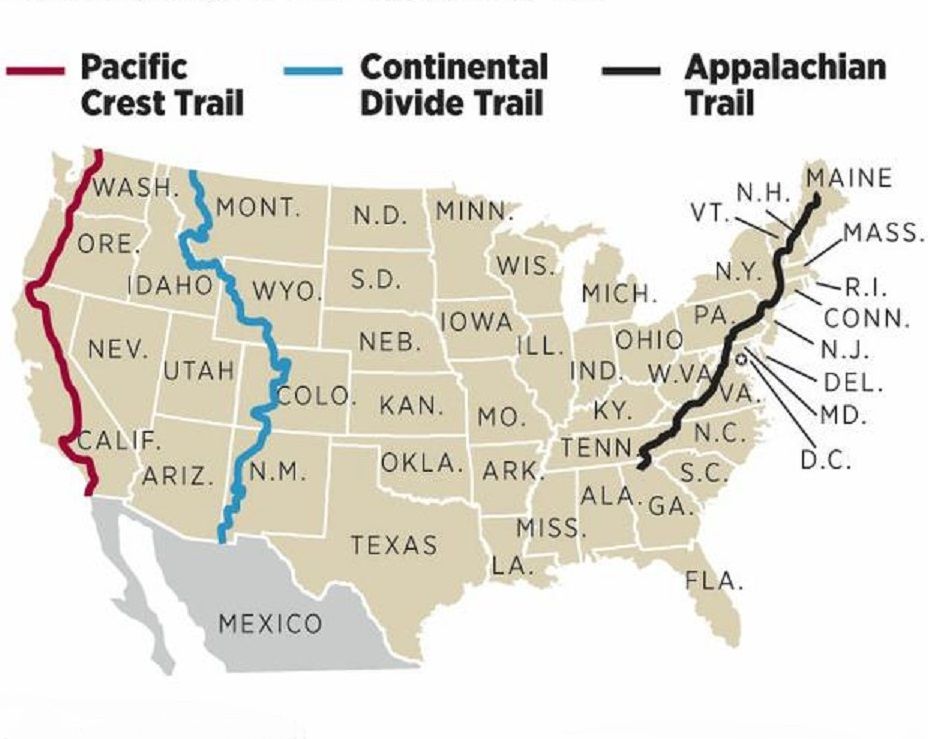 Thru-Hiking:  Hiking a long trail, often one of the Triple Crown, in a single hike

Section Hiking:  Either hiking a fraction of a long trail or completing a long trail in multiple hikes, often over the span of several years

Day Hiking:  Hiking without the intent of Wild Camping, usually with a small backpack or possibly no pack at all

Slackpacking:  Backpacking with either a day pack or no pack at all. This is accomplished by having someone shuttle your gear for you, often for a fee.

NoBo:  Hiking northbound, or from south-to-north. This is a popular choice for all three Triple Crown trails, since it allows hikers to start in spring and follow the warm weather northward as summer settles in.

SoBo:  Hiking southbound, or from south-to-north. On all three Triple Crown trails, this is a much less popular choice, since the weather window is more difficult. Most thru-hikers only hike SoBo if they have to.

Flip-Flop:  To complete a long trail in one sitting, but in sections, typically two. For example, a hiker may start at the middle of the trail, hike to the southern terminus, then fly to the northern terminus and hike back to the middle. Flip-Flopping is sometimes done to handle a scheduling conflict or with the goal of having better weather throughout the hike.

Yo-Yo:  To complete a long trail end-to-end (NoBo or SoBo), then turn around and complete it in the opposite direction.

Ford:  A river or stream crossing that requires you to wade. Making the crossing is called “Fording”. Many hikers will Ford barefoot in the interest of keeping their shoes dry.

Posthole:  When hiking in deep snow, to have your feet fall through, leaving you buried up to your waist. This is obnoxious at best and dangerous at worst.

Rock Hop:  To avoid undesirable terrain (like snow or a Ford) by using stepping stones

False Summit:  A spot that previously appeared to be the top of a hill. Upon arrival, a hiker will discover there’s more uphill to go.

Zero Day:  A day off, in which you hike zero miles

Near-o:  To hike very few miles in a single day, essentially half a day off

Blaze:  An indicator of some kind used to mark the location of a trail

Cairn:  A stack of rocks used to mark the location of a trail, often when there are no other landmarks around

White Blaze:  A rectangle of white paint, the signature blaze used to mark the AT

Blue Blaze:  A rectangle of blue paint, used to mark a side trail linking to the AT. A person who is Blue Blazing is hiking a side trail either just for fun or to take a shortcut.

Yellow Blazing:  Hitchhiking, often to skip a section of trail. Named for the stripe of yellow paint found on many roadways.

Base Weight:  The weight of a backpack, not including any food or water. Since the quantity of food and water in a backpack varies over time, Base Weight is the most common metric used to describe the weight of a loaded backpack.

Skin-Out Weight:  The weight of all of a hiker’s gear. This will include not only the loaded backpack, but also shoes, clothing, trekking poles, and anything else on the hiker’s person.

Ultralight:  There are varying definitions of the term, but a common one is backpacking with a Base Weight of less than ~7 kg (~15 lbs). Going Ultralight usually means giving up some items most hikers would consider a necessity, but some hikers consider it worthwhile to be able to hike farther, faster, and more effortlessly. Bivy:  Derived from the term “bivouac”, essentially a cross between a sleeping bag and a tent. Meant to keep its inhabitant both warm and dry, this allows a hiker to carry only a bivy instead of both a tent and a sleeping bag.

Shelter:  If you’re on the AT, one of the 250+ lean-tos free for hikers to use as lodging. Elsewhere, your means of staying out of the elements, often a tent, but possibly a hammock, bivy, or simply a tarp.

Footprint:  A separate ground tarp for a tent

Big Three:  Your backpack, Shelter, and sleep system, combined. This will often be more than three total items (for example, a typical sleep system consists of both a sleeping bag and sleeping pad). Since these are often the heaviest items in your backpack (including the backpack itself), they’re one of the primary ways to cut weight.

Crampons:  A frame of metal spikes that can attach to hiking shoes, meant for hiking in snow and ice

Ice Axe:  A pick-shaped device used for stopping yourself if you begin to slide down the side of a snowy mountain

Gaitors:  Covers for your shoes, meant to keep dirt and small rocks from making their way inside

Camp Shoes:  Shoes used for camping, but not for hiking. Flip-flops and other light, easy-to-wear options are popular.

Midlayer:  Clothes meant to be worn in between a Baselayer and a Shell. Usually the warmest, most insulating layer, like a fleece pullover or a Puffy.

Puffy:  A down jacket or pullover

Shell:  An outermost layer of clothing, often waterproof, the better ones are both waterproof and breathable. Meant as protection against the elements.

Resupply: To purchase necessary items, usually food. This often involves leaving the trail and hitchhiking into a town.

Hiker Box:  A box of discarded gear, free for any hiker to take what they’d like or leave anything behind. Frequently found at hostels or stores near a popular trail. The cheapest way to Resupply.

Mail Drop:  Receiving mail while on trail, often a package you’ve mailed to yourself

Bounce Box:  A single box you repeatedly mail to yourself, to a location farther up the trail as you go

Bear Canister:  A durable-but-portable container for your food. Meant to keep odors in and bears (and other animals) out. In some areas, use of bear canisters is required by law.

Bear Box:  A large box, often metal, found at a campsite. Used for safely storing food in such a way animals (particularly bears) can’t get to it.

Food Bag:  A bag in which food is kept. Hikers will often hang their Food Bag from a tree overnight.

Cold Soaking:  Preparing food without using heat, by means of soaking it in water. More details can be found here.

Primitive/Wild Camping:  Camping anywhere that’s not an official campsite and has no services, often in some random spot in the woods

Stealth Camp:  To camp with the intent of not being seen, often on private property or somewhere else camping is prohibited

Dry Camp:  To camp in a location with no access to water

Cowboy Camp:  To camp with (usually) a sleeping bag, but no tent, “under the stars”. Best done on a clear night with no chance of rain. 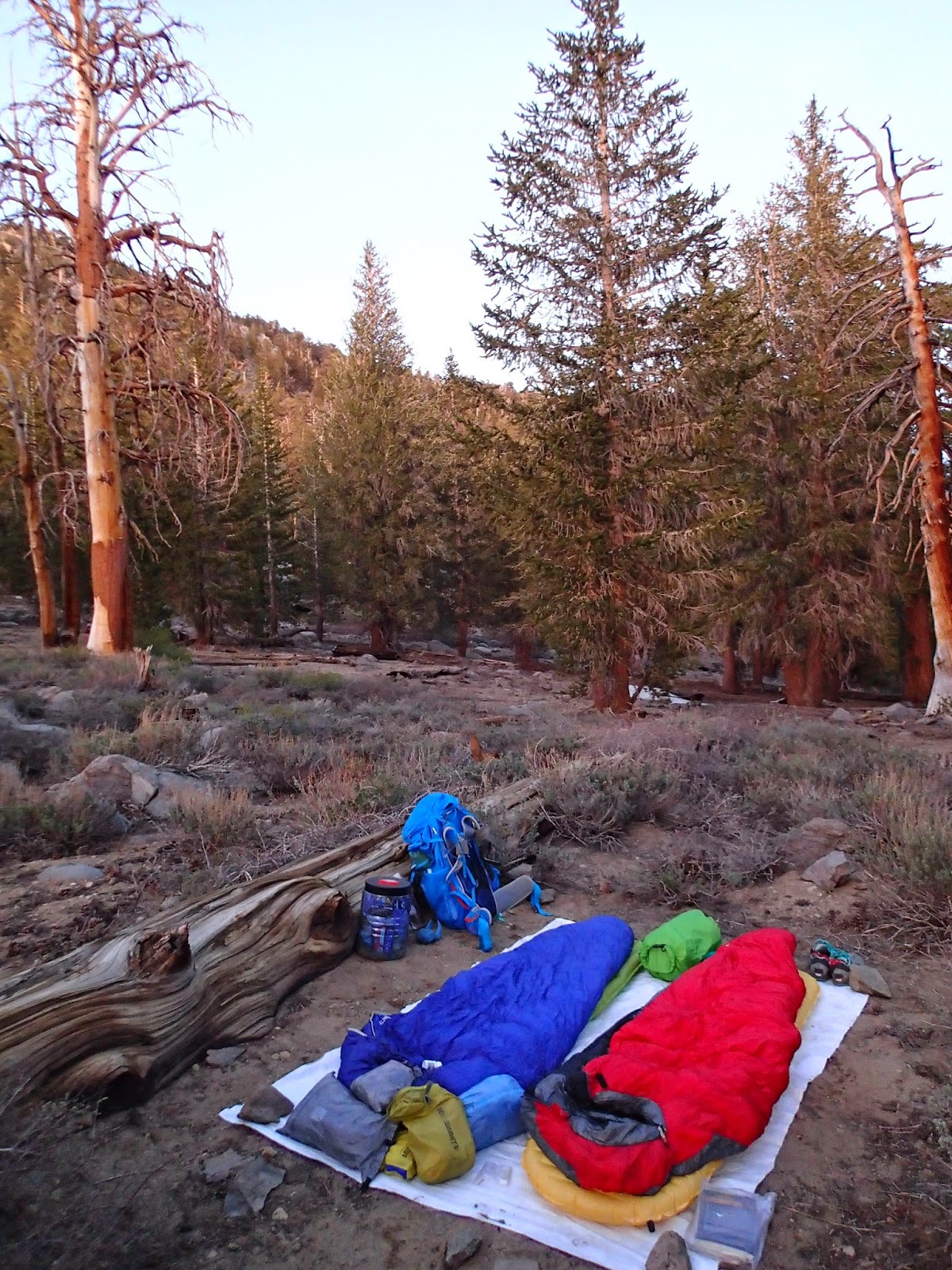 Hiker Midnight:  Sunset, the time at which hikers go to bed

Privy:  An outhouse. Frequently found near AT Shelters.

Leave No Trace:  The practice of leaving the outdoors exactly as you found it, to the point an observer wouldn’t be able to tell a human had ever been present. This includes packing out trash, burying human waste, and avoiding contact with wildlife.

Cat Hole:  A hole dug for the purpose of burying human waste

Register:  Essentially a guestbook for the trail, found at trailheads, AT shelters, and other points of interest. Signing and dating the registers is a good safety practice, since it helps locate missing hikers.

Trail Angel:  A person who helps hikers in some way, by providing rides, food, or other services, sometimes for a small donation or no charge.

Trail Magic:  Unexpected random acts of kindness found on the trail, often in the form of food. It may be as small as a can of soda left for the next hiker who finds it or as large as a full-sized barbecue feeding 50 people at a time.

Yogi:  To beg in a subtle way, without actually asking for anything, usually from tourists and other non-hikers. A Yogi phrase may go something like “Backpacking makes you hungry; you start to really miss things like chips and soda…”

Trail Name:  A name a hiker assumes while on trail. In most circumstances, a hiker is given their trail name by another hiker. While choosing your own Trail Name is frowned upon, it’s usually OK to reject a Trail Name you don’t like.

Hiker Trash:  Plural form of the word “hiker”, particularly if said hikers are in terrible need of a shower

Trail Husband/Wife:  A romantic partner that’s destined to only last as long as the hike

Trail Family:  A group of hikers that become close friends and stick together on the trail

Norovirus:  A highly contagious virus that can easily spread between hikers. Can be prevented with basic cleanliness, which explains why hikers in particular are more likely to get it.

Giardia:  A gastrointestinal parasite, usually contracted by drinking unclean water. Symptoms can take up to two weeks to appear and usually last 2-3 days. Giardia is most characterized by uncontrollable vomiting and diarrhea, both of which will often be yellow and foamy.

Vortex:  Usually a town, but can be any point of interest that draws hikers. So named because hikers tend to get “stuck” when they realize how nice it is to eat hot food, take a shower, and sleep in a bed. Leaving a Vortex and getting back on the trail is difficult for some hikers.

Work for Stay:  Doing chores instead of paying to stay at a hostel or hotel.